Today Ahmad Abad, the capital of the State of Gujarat, is situated 350 miles north of Bombay on the Sabarmati River. The city has long been a center for trading and cutting diamonds, both of which are still pursued today. One visitor to Ahmad Abad in the seventeenth century was the celebrated French traveler and historian, Jean Baptiste Tavernier who, within the space of forty years, undertook six expeditions to the East. In chapter XXII of Part II of his Travels to India, Tavernier described some of the notable diamonds and rubies which he had seen during the course of his travels, often with illustrations, from which the following is extracted:

"No.4 represents a diamond which I bought at Ahmad Abad for one of my friends. It weighed 178 ratis, or 157 1/4 of our carats. No.51 represents the shape of the above mentioned diamond after it had been cut on both sides. Its weight was then 94 1/2 carats, the water being perfect. The flat side, where there were two flaws at the base, was as thin as a sheet of thick paper. When I had the stone cut I had this entire thin portion removed, together with a part of the point above, where a small speck of flaw still remains."

This is the sole instance of Tavernier supplying drawings of both the rough and polished states of a diamond. This briolette-shaped diamond was presumably cut in Ahmad Abad—after that, its history is uncertain. Who was the friend for whom Tavernier purchased the diamond? The most likely person was his sovereign, Louis XIV of France, to whom he had sold several diamonds which included two briolettes. But there has never been any reference to a diamond such as the Ahmad Abad entering the Crown Jewels of France. It is more probable that the "friend" was one of the emperor's courtiers, who would have bought the gem for the emperor.

The Ahmad Abad is next reported to have belonged to the Begum, Hazrat Mahal, the wife of King Wajid Ali Shah of Oudh, who had been exiled to Calcutta by the British following his refusal to sign a treaty of abdication at the time of the Indian Mutiny of 1857. She was a beautiful woman and an outspoken rebel leader at the time of the Mutiny. When British forces regained control after the rebellion, she was obliged to flee to Nepal where, it is said, she traded the diamond in return for her safe passage.

It is unlikely that the diamond has completely disappeared. It should be noted that its weight is lighter than that of the recorded weight of 90.5 carats of the Ahmad Abad; however, such a reduction may be explained by its transformation from a briolette to a pear shape. But of greater significance is the fact that this gem possesses a minor flaw at its base. Is it not probable that this is one of the two small specks of flaw which Tavernier stated had remained after the cutting had taken place? Therefore, it is possible that this diamond, besides possessing an inherent beauty found in the finest diamonds from the historic Golconda mines of India, is also a long lost gem.

The Ahmad Abad has been certified by the GIA as "D" colour, VS1 clarity and was accompanied by a working diagram indicating that the clarity is improvable. 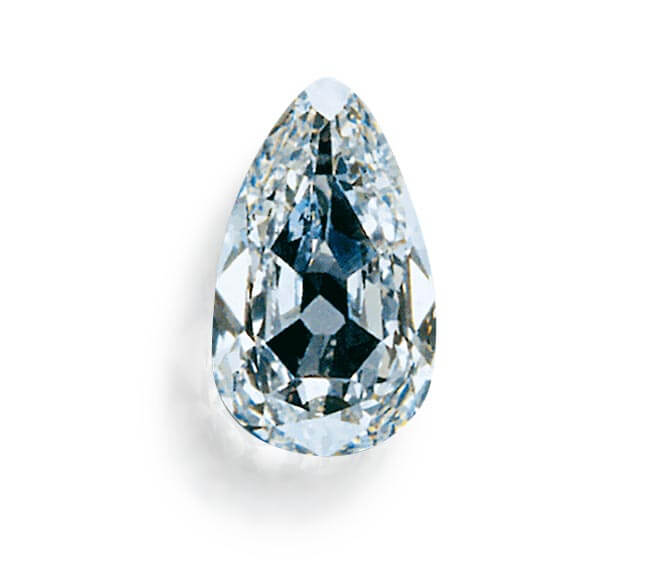