These two diamonds are linked to the "Malabar Hill Murder": One evening in January 1925 at an hour when the hanging gardens of Malabar Hill, one of the most salubrious parts of Bombay, were crowded with people, an official of the Bombay Corporation was driving along its ridge, accompanied by a friend and a Muslim woman. Suddenly their car was attacked by armed men. The official was murdered and the two others badly injured. Four British officers passing by went to their aid, and managed to detain one of the assailants.

During an earlier case before the Bombay High Court it was revealed that the Muslim woman, Mumtaz Begum, had been a dancing girl at the Court of Tukoji Rao III, Maharajah of Indore, one of the three great Maratha states in central India. She had been one of the many concubines of the prince, who was captivated by her, but she did not return his feelings. While the entourage of the Maharajah was traveling, the girl had jumped off his private train, escaping to Amritsar, then to Bombay where she came under the protection of a rich merchant.

It was agreed that the crime on Malabar Hill could not be ignored: Mumtaz Begum had recognized her assailants as an aide-de-camp of the Maharajah and members of the Indore army and mounted police. The Maharajah's involvement in the crime was never made public but he was asked either to appear at the subsequent official inquiry or abdicate in favor of his son. In the following year he chose the latter course.

While traveling in Switzerland after his abdication, he met Nancy Ann Miller, a rich young American. Amid much publicity the couple married in 1928. The bride embraced the Hindu religion and subsequently became known as the Maharanee Shamista Davi Holkar. In 1946 Harry Winston bought the two pear-shaped diamonds, weighing 46.95 and 46.70 carats, which the Maharanee had worn on many occasions. Winston had the gems recut to 46.39 and 44.14 carats and shown in his famous exhibition called "The Court of Jewels". In 1953 he sold them to a client from Philadelphia, repurchasing them five years later and selling them to another client in New York.

In 1976, Winston bought the Indore Pears yet again before selling them to a member of a royal family. Robert Mouawad has been the owner after that. 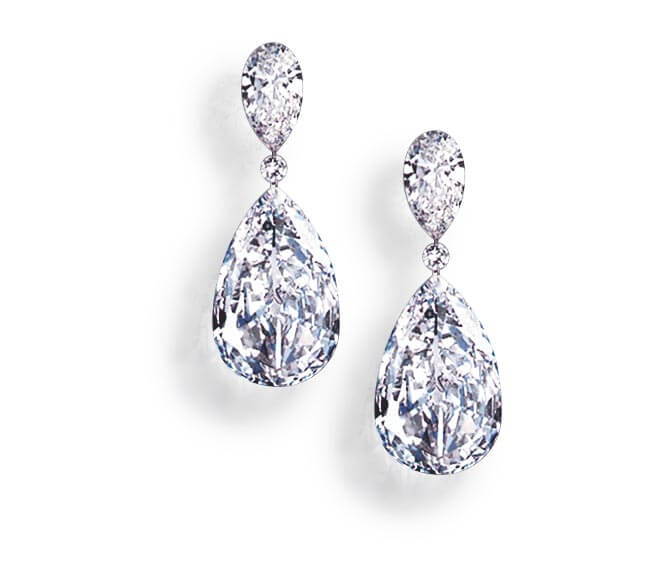